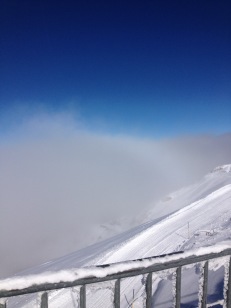 My favorite player is Roger Federer. A couple of years ago, in a moment of unclarity, I started to think he might retire soon. I thought we should go see him in his hometown tournament, Swiss Indoors Basel, before we can’t. It was one of the best trips we took.

We went to two days of the tournament, up Mt. Titlis, Spent a day in Zurich, and walked all around Basel. And the food!

One of the most impressive points of this city and the country overall is the melting pot of European cultures. It seems as if everyone speaks at least 3-4  languages, German, French, English, and Italian. In Basel, they will greet you with a German “Biten” and then start talking to you in the language you answer in. The waiters know 5 or 6. They make you feel so welcome.

We stayed at the Passage Hotel, 51 Steinengraben, 4051 Basel. It had a clean, European minimalist feel to it with the most helpful French and German desk attendants that spoke a lot of English. They each drove into Switzerland one from France and one from Germany every day. There was a wonderful breakfast each morning of breads, cheeses, fruit and porridge, and coffee was available all day. We even sat next to tennis hall of famer Mats Wilander at breakfast one day. The center of town is just a short walk down the hill. From there you can pick up the tram, just have to make sure you have a tram pass. They are free and we sent away early for ours. The tennis tournament was at the St Jakob tennis center, a short ride away. You take the 14 line to St Jakob tennis center from the Barfusserplatz stop (headed toward Prattein). 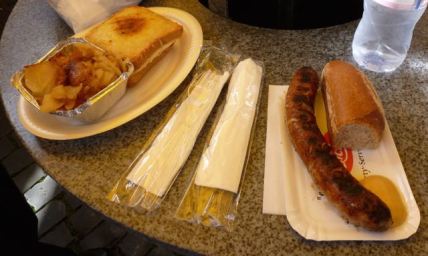 Since our visit was in October, it was too early for fondue to be available, and we didn’t seek out any traditional Swiss food such as Raclette. But there was plenty of  French and German food to enjoy. And we split it down the middle, my husband going all German with sausages and mustard while I went all french with fish in a lot of sauces and butter. At one restaurant, I had sole meuniere where the fish must have been 2-3 pounds. But mostly I had Perch, which was pretty cool since it’s not a fish I can get here at home. And potatoes. Potatoes with everything – I was in heaven, I love potatoes.

Swiss wine isn’t exported much, so this was a treat to have it. I’m not a wine expert in any sense. I drink what I like, and that seems to be more French, Spanish, and Italian. The Swiss wine I expected to be along my taste since it’s from the same region of the world, and it was. There were 4 whites that I tried and would recommend them all: Epesses, Heida, Belcoline, and Riesling x Sylvaner.

So to the reason of the trip, to see Federer in the city he calls home. The St Jakob arena was really nice. For a 500 event, I felt spoiled. All of the vendors has fully furnished booths, not just little pop ups. And there was a good variety of vendors from Swiss Davis Cup team gear, to Swiss Indoors gear, to all sorts of sponsors and of course a Swiss chocolate vendor. Plenty to shop around in between matches. There were so many food options from a full cafeteria with Swiss food, and kiosk vendors with Indian, Italian, or canapes. Of course for a Federer event there had to be a Moet lounge. Nothing better to refresh with then a glass of Moet Rose. The venue features two courts. The main court is in pretty much an indoor stadium. The second court was a small room off to the side.

So we took our seats and waited for Federer to arrive. Then the lights went low and a whole lot of German commentating was coming across the PA and then in English “Welcome Home Roger Federer!” and he walked in to a huge cheer. He quickly disposed of his opponent. He had quite a nice on court post interview – in German! I have no idea what he said.

Also on the agenda over the two days, there was Rafa, Stan, and my USC favorite, Steve Johnson. It was Rafa’s first Swiss Indoors and he ripped though his opponent. His on court post interview was in English, so that made up some for not understanding Federer. Stan received a very warm welcome in his home country also. This was shortly after he had won his first slam, so in town, we did see advertisements with Stan. It was nice to see him coming into his own after so many years in Federer’s shadow. Stevie J took on Raonic. He lost, badly. It was so quiet during his match and you could tell nobody knew who he was. At one point I wanted so much to just stand up and scream “FIGHT ON, STEVIE!” but I didn’t want to be THAT ugly American.

We did get to see some of the Next Gen players, Goffin and Zverev. Zverev took on Rafa, and we know how that turned out. I can’t remember who Goffin played, but I remember Goffin. I was so impressed with him. He was just ripping that ball. You could tell then that he was going to be top 10 easy.

So that ended our two days of matches and we went on to explore Switzerland.

Let’s face it, you can’t go to Switzerland and not go up a mountain in the Alps. We took a train from Basel to Mt. Titlis. The ride was a couple of hours in a very new and comfy, well lit train. And the whole time you are just gazing out the window at the Swiss country side. The classic green rolling hills with the Swiss mountain houses and cows in the fields. Very beautiful.

Once we got there we started up the 2 sections of the gondola. The first section was a little square one that went straight up to a stop. There you switched over to the rotating cable car to take you to the top. This is just one of 3 rotating cable cars in the world. And believe it or not, we have had the fortune to be able to go up in a second one. The BNP Paribas Open masters 1000 tournament in Indian Wells CA has the Palm Springs Aerial Tramway to go up the mountain in Mt San Jacinto state park. That is interesting, from desert 100+ degrees Fahrenheit to a snow top mountain in a few minute gondola ride. As you go up the round car rotates so you can get a 180 degree view of the scenery around you.

Once we reached the top of Mt Titlis, more than 10,000 feet up, we explored outside a bit, shopped the Lindt chocolate shop, and had hot coco and beer at the cafe. There is a cafeteria if you want to have lunch. While sipping my cocoa looking out the picture window of all the mountain tops, we had the best conversation with the waiter. He travels all over the world and he speeks so many languages. Just while we were there he was switching from English, to German, to Italian, and Mandarin. He just switched from person to person like they were one big language.

One of our day was spent in the city of Zurich. Again we took the train to get there. What a beautiful and clean city. As you walked down the main street it was just high end store after high end store. But they weren’t in slick clean buildings, they were all in that classic old swiss style building. We stopped in the Lindt-Spruengli cafe for lunch. The store had a take away counter with all sorts of food. I opted for a chicken samosa and other little snackie foods. We were very temped by all of the chocolates and macaroons, but knowing our next stop we held off. We walked down to the lake and ate our lunch by the water.

We then boarded a river cruise and went down the lake. Our stop would take us to the Lind-Spruengli factory.  They don’t offer tours, but have an outlet shop behind the factory. Since it was late October, the whole place was decked out in Christmas. The one end of the store was all set up like a home of Christmas bears. All of the chocolates were made there in Switzerland or Germany, with so many offerings you can’t get outside of the area. All of the packaging was in german with pictures of shiny Christmas decorations and Christmas bears. My favorite was all of the advent calendars with cozy Swiss village scenes. We loaded up and made our way back to the center of the city. It was time for a break. We sat outside an Italian cafe and had cappuccino  wrapped in blankets. All the cafes in Switzerland have outside seating with blankets on the chairs so you can stay toasty and still be outside. Our day in Zurich was done and we headed back to our home for the week, Basel. 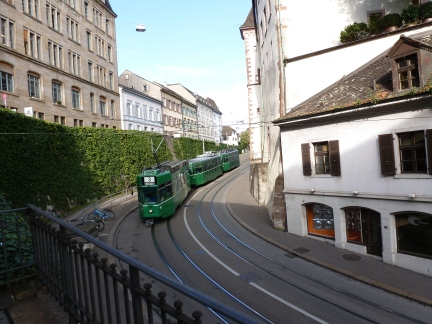 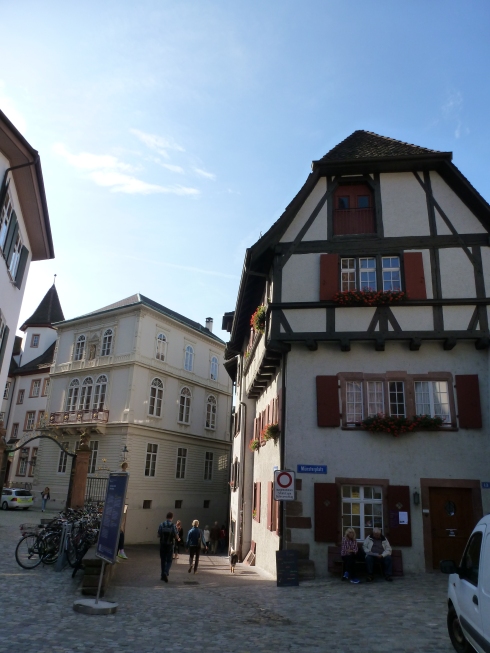 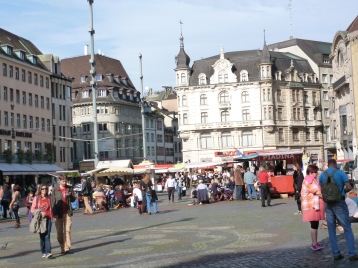 The weather was perfect for the week we were there. It made exploring the streets of Basel so nice. We went into the center of the city a few times over our visit, it was just a short walk down a hill.

One of the first places we went was Coop,  a multi level department store. The bottom floor is a complete grocery store and the floors above are a typical department store with a men’s floor, a women’s floor… I love to go to a regular grocery store when I visit another country. It makes you feel like you are really seeing the regular day to day of the place. They had sooo much chocolate, and all of the Christmas chocolates and cookies out. The cheapest chocolate is still so rich smooth and creamy. We stocked up. Our suitcases were jammed packed with chocolate by the time we left.

We walked all over and across the river shopping, seeing the traditional Swiss architecture, and looking at the sculptures and art. The center of the city had a plaza where everyone came out at lunch to grab a bite at the street vendors. They were eating their sausages that they dip into the accompanying mustard. I opted for a croque monsieur – again, french food for me! We took a ferry boat back across the river and continued on our visit.

As each day day came to an end, we climbed back up the hill to the hotel, brewed a cup of warm coffee and settled into our room. I just keep thinking we have to go back again, I really loved it there. Maybe someday.