The current Federation Cup Champions, The USA, were back in action this past weekend in Asheville, NC against the Netherlands. We decided to take a long weekend and head down to see our first Fed Cup tie. After we bought our tickets, we got a great surprise and the line up of Venus Williams, Serena Williams, CoCo Vandeweghe, and Lauren Davis was announced. What luck! 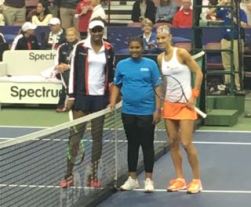 The winning team, The welcome, The first coin toss, The Trophy!

This was the first time the team has played since winning the 2017 cup. And it brought out quite a crowd to see the team and the trophy. And in true competitive fashion, the Fed Cup team prevailed in their first tie back.

Day one started with announcing the teams, exchanging gifts, and singing the national anthems. All the spectators are decked out in their USA gear, flags painted on their faces, and noisemakers and pom poms in hand. Fans come out in full support of their country – with the noise to prove it. USA now had to get the best of 5 matches.

So with horns blowing, drums beating, and fans chanting, the first match was on it’s way. Venus was taking on Arantxa Rus. Venus was in great form and after a great match prevailed 6-1, 6-4. As Venus said, on paper it looks like she should have won easily, but Arantxa played well and it was a battle. I love seeing Venus do so well, and at 37, it makes it an accomplishment. I admire her fight and positive attitude and having these while enjoying herself.

Next up was CoCo vs Richel Hogenkamp. Wow! Wow, what a match. CoCo is always intense and you never know how her matches will go. She was dug into a hole down a set and love-3. It seemed like the match was over. But then we were treated to one of her racquet smashes (I know I shouldn’t, but I LOVE it when she freaks out and bashes up her racquet) and we knew she was going to get her head straight. Slowly she climbed out of the hole and took the set. The crown was roaring! And then she took the last set to win it. I was tired from just watching the match.

End of Day One.

Day two was going to be short for us, we had to leave to catch our flight. Day two is reverse singles and a doubles match, if needed. The fans were back noisier than ever – it was a sell out of over 5,000 fans. Venus was taking on Richel Hogenkamp. Venus started out strong and was up 3-0. Richel calmed down and got her rhythm to string a bunch of wins to even it up. It was a match! Both women running each other around with some powerful serving. Venus pulled out the first set 7-5. Richel started to show some fatigue and Venus took over winning the second set, match, and tie! USA wins the first tie and is on to the semis!

The wining team did their victory lap waving the American Flag! Great start to 2018 and defending the trophy.

With the weekend of play over, they didn’t want to disappoint the fans who had come out to see Serena. So one more match was played, The Williams Sisters taking on Lesley Kerkhove and Demi Schuurs. We only got to see 3 games of the match before we had to leave – but it was the first time I to to see Serena play live (FINALLY!). I have had a string of bad luck getting tickets to see her play and her not being able to. So I got to see that serve, her ace one and I can finally say I saw it live.

It was a fantastic time and if you ever have a Fed cup tie near you, go see it. It’s one of the few times tennis fans can let loose and cheer as loud a possible. And it’s a team sport for your country, it’s quite an event. 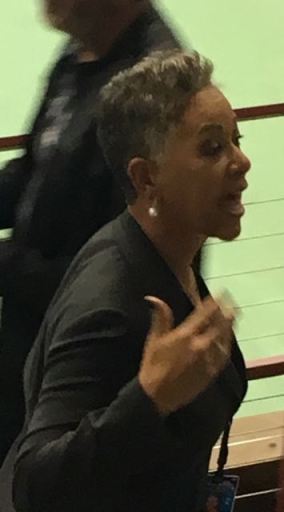 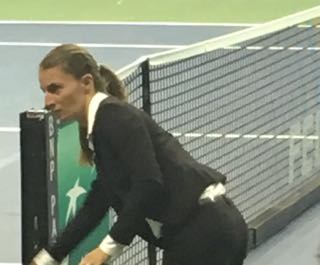 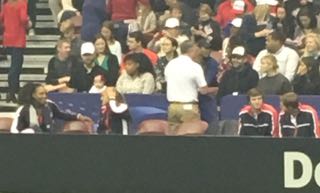 While the players are doing their thing, there are all the other people hard at work to make all of this happen. Katrina Adams, USTA President, actually came to each section of fans and thanked that section for coming out to cheer on the team. Chair Umpire Eva Asderaki-Moore checking the nets and making sure all is in order. She is impressive – she made history in 2015 when she was the first female chair umpire to call the men’s final at the US Open. And Alexis Ohanian on daddy duty with baby Alexis. You have to look real close in my terrible picture but that’s him on the left with the white cap and baby Alexis on his lap. During the match he was even feeding her a bottle, what a great dad. 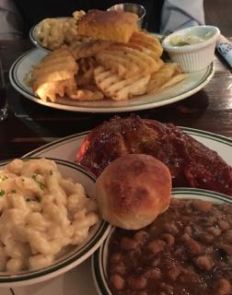 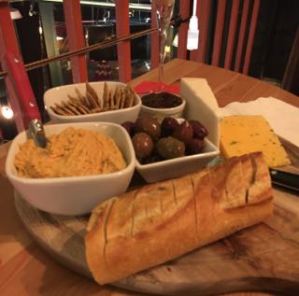 And of course, every trip has to have great food. The first night we went to Buxton Hall BBQ. I went with the BBQ chicken with black eye peas and the side special of the night Mac and cheese with a biscuit. My husband got whole hog BBQ with cole slaw, waffle fries, mac and cheese with corn bread. Very good.

The second night, I was in my heaven. We went to Battery Park Book Exchange and Champagne Bar. It’s two floors of used and new books, rare books, and signed books. It has an old library feel to it with comfy leather chairs and stacks and stacks of books. The best is all the champagne. And light bites of cheese, meats, hummus, and other small foods. We settled in with a couple of glasses and a cheese plate and listened to the Gypsy Jazz that was playing for Saturday night happy hour.

So our quick weekend down south to the Fed Cup was extremely successful. Next up, France! U-S-A, U-S-A!