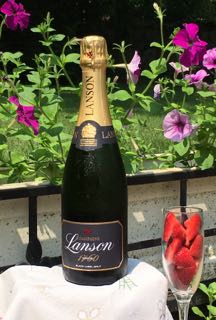 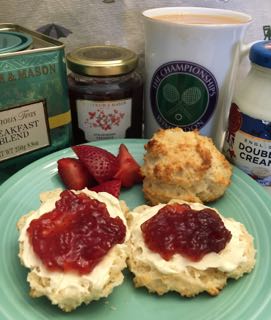 We got an early start on the July 4th holiday and watched the end of the live coverage with a cream tea. Interesting day. Rafa won as expected, but a lot of my faves lost. The most surprising loss was Petra Kivtova. (Podj, Kvitova!) Also lost to the tournament was Sharapova, Goffin, Ferrer, Verdasco, Sock, and the French Open finalist Dominic Thiem. Dominic did lose to veteran favorite Marcos Baghdatis. I remember our first Wimbledon. I watched Baghdatis for 4 hours on court 2. I somehow was able to sit just two rows back. I can’t even describe how “in the match” you really feel when you are that close. That is the magic of Wimbledon, to be able to see tennis at that level that close.  And all for the price of a grounds pass – a Wimbledon grounds pass, that is a great deal. I’ll save you my opinion of the cost of US Open tickets for this year.

So, not much to report on today, so on to tomorrow.

First match on Center Court is Pliskova Azarenka. That is my match of the day. I’m going to have to get up early on the holiday to see that. And the men’s doubles start. Mike Bryan is pairing up with Jack Sock while Bob recovers. It should be a pretty routine day, I’m not thinking any upsets tomorrow, and a good thing because I can’t take anymore after today.

And the Lanson is popped, the pasties cooked, and we are settling in to see the Tennis Channel replay of the day. See you tomorrow.