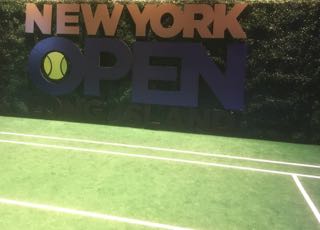 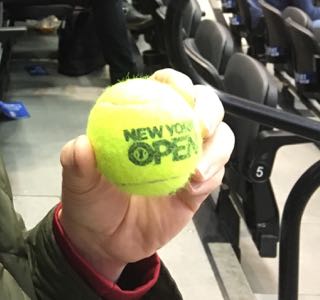 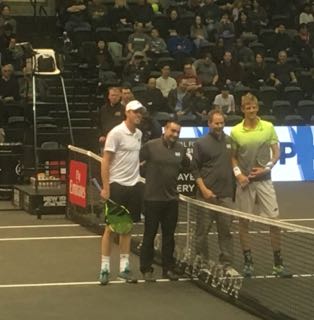 The national anthem was sung, the coin was tossed, and Fergus Murphy, chair umpire, announced play…Kevin started strong and breaking Sam early, but Sam fought back to take the 1st set. Again Kevin started strong in the second set and was serving for the set Sam fought back and started to close the gap, but Kevin was too good this set and took it. It was neck and neck in the last set and went to 6-6. The tournament was going to be decided by a tie break. Kevin jumped out of the gate and took it to 5-0. Sam dropped an F-bomb and smashed the tar out of his racquet – very unlike the cool Californian. Kevin scored his last points to take the first NY Open title. 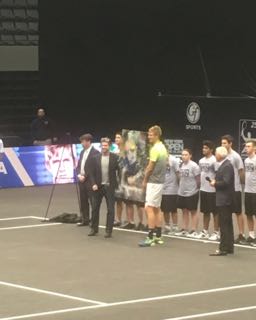 Kevin with the Trophy

The NY Open did a new idea for a Trophy. The trophy was an original painting by artist Ted Dimond. He’s the one on the left of the painting in the picture. Also, the tournament had some of his artwork donated for raffles and silent auctions with proceeds going to charity. There were paintings of both players and of venues like the US Open and Wimbledon. 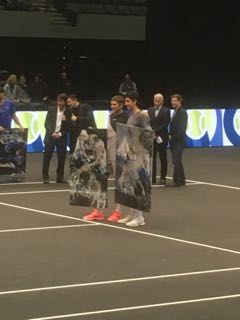 Mirnyi/Oswald fought hard to take the doubles in a third set tie break. This was Max Mirnyi’s 100th final. It was nice to see him take the title. And to make it more special, his daughter traveled as his coach for this tournament. There was a little corner of the stadium all decked out with Belarus flags, cheering on every Mirnyi/Oswald point. This was a very special tournament for him. 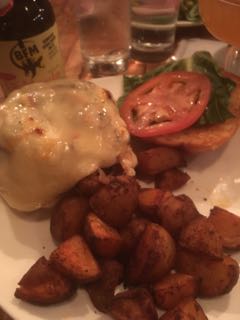 Raclette on a burger

We came up the night before and stayed in Manhattan. Our hotel was The Manhattan Club. We picked it based on location and availability and were amazed by how great it was. Very surprised by how nice a blind pick could be. The staff was friendly and the hotel was beautiful. They had a bar/lounge that was all decked out in cozy couches for complimentary coffee in the afternoon or a sleek evening of cocktails at night. In the morning it served a grab and go breakfast or a sit-down breakfast buffet.

Dinner was at Raclette. It’s a Swiss restaurant with all the scraped melty cheese you could want. They also serve Swiss wine and beer. Switzerland doesn’t export their wine and beer very much so it was a treat to have it. The place is small with that close Swiss cozy feel. You do need a reservation, it’s a busy place.

Henri Bendel is an accessory store and they were having a HUGE sale over the President’s Day weekend. If you read this the first day I post it, 2/19/18, it’s still going on, click on over to the site to check it out. I first heard about them through the US Open when they did some advertising at the tournament. We had to take advantage and did some gift shopping as well as a little something for myself.

It was a quick day and a 1/2 trip, but as in NY, it was fast paced, delicious and full of fun.