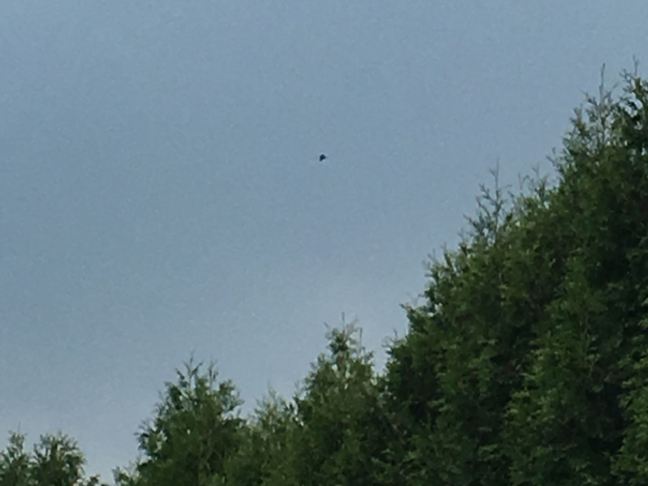 Yesterday started out with the usual plans of hitting some tennis balls at some time during the day. But then in the afternoon it hit me, it looked like rain. All of a sudden the skies just got dark. I said to my husband, we need to go to the courts NOW or we won’t be able to play today. He assured me it was just cloudy and we’ll be fine, until he checked the weather and it said that storms were coming in and lasting until 9 pm with high winds. So we gathered ourselves up and rushed over to the courts. And that just set the tone.

I couldn’t hit the ball with the center of my racquet to save my life. And hubby was spraying balls everywhere – hit one clearly over the gate and into the trees sending a bunch of birds flying and losing the ball in the brush forever.

Not to mention you could feel the impending storm. We even saw our area Eagle flying for cover. I put a picture of him above, but you can’t really see him. By the time I snapped the picture, he was well on his way.

But this bring me to my point about how the littlest distraction can throw you off your game, even if you are just out hitting balls. It has always amazed me how these players can keep a cool head with so much on the line while packed stands cheer, and millions more are watching on tv.

How do the minds of players like Andy Murry, Serena, and Federer keep them in the game, with all of this going on and sometimes on the losing end of a match just to end up pulling out an astonishing win? They all have different approaches and what works for one doesn’t work for the others. But they do one thing, as the football coach Pete Carroll says, “Always Compete!”. Something I admire, and can’t always do myself. Murray mutters to himself to psych himself up, Serena roars, and Roger quietly focuses to pull his game back to a laser perfect attack.

So as it started to rain, growing dark with street lights coming on…that was the end of our tennis that day. We got in the car and it started pouring by the time we got back home. 45 min of tennis is better than none!

One thought on “Day off or off day”