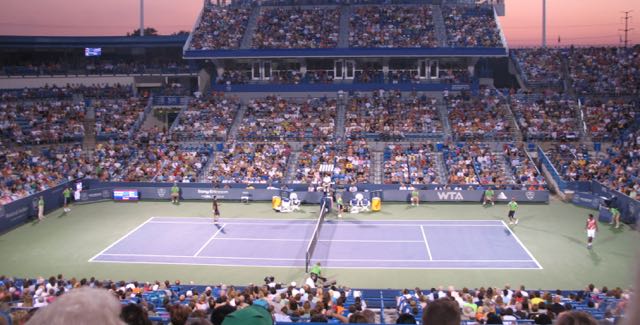 This week the ATP and WTA are in Cincinnati, Ohio for the Western & Southern Open. When this tournament comes around, it brings me back to the first time we went to a Masters event. I remember wondering if a Masters would be as exciting as the Slams I had been to, if it would be worth the trip to see it. And yes, it was, and they still are today.

Slams are rooted in the event, the tradition of Wimbledon, the excitement of the US Open, the clay of Roland Garros, the celebration of the Australia Open. But the masters are rooted in the pure competition of high level tennis. I remember feeling like I was surrounded by very knowledgeable tennis fans. And so close to the actual players. I felt more like I was part of the competition, not the event.

The venues are smaller, so you can get seats so close to the action. The players are the size of actual people, not the little specs from the upper levels of Arthur Ashe stadium. You can hear the player comments, the chair umpire discussions, and every grunt – good or bad. With so many points on the line, all the top players come to play and are so competitive.

And you can get up so close to the practice courts. At the W&S Open, we were just standing on the side of the court, no fence, watching Petra Kvitova (fresh off of her first Wimbledon title) hit on one side and we could turn around and watch Mardy Fish on the court next to her. There were multiple autograph sessions with players, and the players were more than happy to stop and sign autographs and take pictures at the players car entrance.

These venues also have stepped up their game on accommodations also. There are multiple food options, and the W&S open has improved since we’ve been there. And of course there is shopping. Individual labels such as Fila or Under Armour have their own shops and then there are full gear shops such as Midwest Sports. There are shops with tennis themed gifts and some slams even have tennis artists exhibiting their work.

The Masters are like mini-slams, but give a passionate tennis fan so much more. I’ve been to a couple now and look forward to going to more. Next year, Montreal, or maybe Miami. We will see…